YOU DON'T GIVE A RAPIST A HONEYMOON PERIOD

(Note: this document has been annotated for the express clarity of Trump and his supporters).

We are in for the ride of our lives.  America hasn’t been this exciting since the Civil War, or just prior, when Preston Brooks beat abolitionist Senator Charles Sumner with his cane. (For Trump and his supporters: this is a reference to a dispute between elected representatives that presaged the American Civil War, a conflict which ran 1861-1865).

And in this great age, we are going to be led largely by privileged billionaires who appear to know very little about the real lives of most Americans. The Department of Education, for instance, is to be managed by a woman who freely admits that neither she nor anyone in her family has ever had to apply for a student loan, grant, or scholarship to get higher education. She is on record as being against public education itself, something which has pretty much been on tap since Jamestown, when the town fathers decided to choose someone to act as school master for the little shavers. This inadequacy for the job is not unique. In fact, General Mattis, incoming Secretary of Defense, the guy who says, “Be polite, be professional, but have a plan to kill everybody you meet,” is the most qualified member of the cabinet. (For Trump and his supporters: I am not praising Mattis for this comment, but quoting it because I question the man’s state of mind and I'm comparing him to the other cabinet choices).

The Big Orange Baby, we are told, has cast these people in these roles not due to their qualifications, but because he figures they’re winners and because they look the part. That’s as far as his pee-wee intellect goes. Winners and look-rights. Their fitness to actually run anything, particularly the intricacies of government agencies, is not an issue.

Is this a great country or what?

(For Trumps: there is not an actual baby running the executive branch of the government; this is a mocking reference to Trump himself).

The Big Orange Baby was sworn in this week as Chief Big Orange Baby. He delivered a 16-minute speech written by people who, apparently, have never read or seen an inaugural speech delivered, or if they have, weren’t paying much attention. We’re supposed to believe it was written by Trump. See the picture of him writing it, here.   Doesn't he look natural?   Comfortable?   A man truly writing something?  I’ve been writing professionally since I was 16, and I can assure you, that’s what we all look like when we write something. (For Trumps: this is not true). 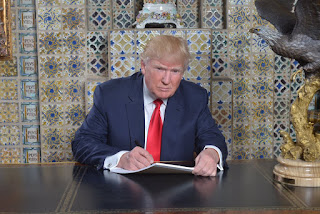 Of course, many believe that some guy named Stephen Miller wrote it, or the KKK guy, Steve Bannon. I don’t buy that, either. Having read the thing, I’m more inclined to believe it was written by the Young Republicans Club at my kid’s high school. What’s more, one of them, clearly, was forced to read “Native Son” in English class, a novel by Richard Wright written in 1940. Hence all that stuff about blacks in inner cities suffering great social injustices that force them to go for each other's throats.  It’s possible they also heard Elvis Presley’s recording of “In the Ghetto.” Someone sure boned up to understand the black situation in America. The one thing they didn’t bone up on is that the ‘inner cities’ are now gentrified in most parts of the country, and if you don’t believe me, try getting a house or apartment in Brooklyn or the Bronx.

I didn’t watch the actual speech because to see Trump acting the role of President reminds me of the grim fact that as of November 9, all my books about American politics and presidents are now tissue paper, worthless, just as the office itself is a farce, because this guy – and all the uninformed who voted for him, not caring about their fellow man or their fellow woman – have reduced the whole office to a comedy sketch. This may not be such a bad thing, because everyone has made too much of the role of President, but I still feel badly about all those books being so devalued.

One day after the inaugural, we got the first appearance of Trump’s Press Secretary in the actual Press Room. He held a long, informed Q and A with the members of the press, talked about how to make things work more efficiently, and outlined his methodology of attaching the job.

Joke! (Note to Trumps: this means that the previous paragraph was a joke and fake-out; it didn’t happen).

In fact, Sean Spicer stormed in and ranted for five minutes about how the press lied about the size of the crowd at the inaugural. Then Spicer himself lied, saying said the crowd was the greatest in history, certainly bigger than the crowd for Obama. He then warned the press that they’re on notice to stop putting out any stories that the Big Orange Baby is anything other than the greatest baby in the world – also a terrific dancer, musician, lover, jouster, and falconer. If you say otherwise, your head will appear on a spike on London Bridge. (For Trumps: this is a joke and comparison I’m drawing here; comparing Trump to Henry the VIII of England, who was notoriously thin-skinned about his achievements and popularity).

When questioned about Spicer’s lies the next day by Chuck Todd of NBC, Kellyanne Conway-Goebbels said, “He wasn’t lying; he was giving alternative facts.” The rest of her interview, when it came to discussing the press, included lines like “we let the press in,” “we allowed the press to cover the President,” and so on. (For Trumps: I am not supporting but decrying this woman as sorrowfully confused about democracy).

Okay, so where does all this put us? Well, as I said, we are in for the ride of our lives. And in for the job of our lives. Aye, there’s the rub. See, in my view, to survive this thing there are certain actions we must take. We must actually do something. I know that’s hard for American voters to imagine, but it’s the new reality.  Doing stuff.

Fortunately, a good step in the right direction was taken yesterday.

Yesterday, millions of women, men, and children in the United States and around the world took to the streets to protest Trump and his policies, particularly as they relate to human beings. I don’t know what this will do, exactly, but I think it’s a great practice, because we have to get into the habit of telling the government of the United States to fuck off. That’s the job I’m talking about. People like mealy mouthed hyper glib hyper-privileged Betsy Devos needs to be told to fuck off. This guy Sean Spicer, red-faced and hysterical sell-out that he is, needs to be told to fuck off. Kellyanne Conway as well. So does Exxon Mobil’s Secretary of State, Rex Tillerson. Jeff Sessions could do with being told to fuck off all day, and twice as much on weekends. In other words, this is the worst cabinet ever appointed in the history of the Republic, and I think we start right off not by bowing and scraping to the idea of the usual honeymoon period and “give them a chance”, but simply fight back from the get-go.

Why not? You know what they’re going to do because we’ve done something they haven’t done – something the people who wrote the inaugural don’t do, something Trump doesn’t do, something his glib flak-catchers don’t do -- and that's read history books. So we know how this goes. And we’ve done something else they haven’t done: we’ve observed things, even in the last few days. So we know that fighting back, or hitting them with a brick, is the appropriate response. As General Mattis himself might say, don’t give them any quarter.

Yes, it’s highly possible that Trump the devil turns out to be no more threatening than Warren Harding, whom he resembles in so many ways, right down to the Jesus preaching VP and the corrupt cabinet, to say nothing of the popular college prof liberal who preceded him. It’s also possible he could turn out to be the last President of a relatively free and un-nuked America. But why wait to find out which one comes true? I say go after him from the get-go. He’s told us what he’s all about, over thirty years in the public eye and two years on the campaign trail. We know all we need to know. You don’t give a honeymoon period to a rapist.

That’s our ride. That’s what we’re in for. I hope we’re up for it. It’s a cinch that the glib smoothies that Trump has sunk into these super-powerful jobs aren’t up for their jobs. Let’s hope we’re up to ours.
- January 22, 2017