I AM WILBUR WRIGHT AND SO ARE YOU

As each day dawns and we're given another forehead-smacking political bombshell, it's becoming clearer just how badly America has humiliated itself.  Some days this infuriates me.   Some days I'm more rational.


Countries often humiliate themselves.  Look at France. France has humiliated itself a lot and yet it remains a great nation, a great culture, and a great people.  Take a look at Greece.  Greece humiliates itself so much it's become the long-lost brother who shows up at the wedding only to borrow money.  Greece, however, is also the cradle of democracy, and gave us theatre and philosophy.  Beat that.

The United States, of course, is exceptional, so it has to do stupid things exceptionally stupider than anyone else. The pedal goes to the metal, as it were, because this isn't Albania or Luxembourg.  So we've humiliated ourselves on a gargantuan scale -- think Superbowl half-time show, lights, lasers, smoke, gyrating pelvises.   Unfortunately, in our humiliation we've also threatened the rest of the world, causing all sorts of innocent people untold grief while putting our very history and name to shame.

Yep, our election of the Big Orange Baby has made us an object of fear and hatred as well as a laughingstock.  How our institutions are handling the situation has made things even worse; under the leadership of Paul Ryan -- now sadly revealed not as the 'last rational man in Washington' but a craven little boy -- and Mitch McConnell -- not a tough political operator but a blowhard and scraping pol -- and the Democrats posturing as if they hadn't botched things on an epic level, we have revealed the U.S. Congress to have all the moral leadership of  a political Steppn Fetchit.  So if people truly hate the United States, who can blame them? The place is being run by the Keystone Kops, minus the charm.

This isn't okay.  Nor, however, is it fatal.  There are some good things in all this.

For one, we are being given a unique opportunity to really run this thing around the track; to find out if the country (and all it thought it stood for) is truly great or truly full of crap.

Even more amazing, we know exactly how long that part of the process will take.   Four years!  Maybe sooner, but no longer.  Four years!  I've been delaying getting crowns done for longer than four years.

Think of it:  by the time four years is up we'll know for sure if we should rip up Gettysburg and turn it into an RV park, or keep it as a monument to the notion of government "of the people and by the people"; we'll find out if there should be a monument to Washington at all or instead put in a much needed ring-road to alleviate traffic in D.C.; or if the U.S.S. Arizona should be hauled up and sold for scrap or kept underwater for eons of little kids to gawk at.

It's a gift.  Like being told exactly how much candy you're going to have at the end of Halloween, or exactly what time your parents are going to wake up on Christmas morning.

Four years, and all we have to do to just a little recasting. That means stop thinking of ourselves as the yo-yo's who foisted this great injustice on the world, or the hacks who fill our houses of Congress, and start picturing ourselves in far better starring roles: settlers struggling across the west, say, or the guys fighting in Guadalcanal.  How about the women of 1919 demanding the vote or John Lewis at Selma? Sacagawea leading Lewis and Clark to find the Pacific Ocean, or firefighters on 9/11?  Sully landing the plane.

This isn't dead history stuff, unobtainable and as pertinent as the fables of Camelot, this is the real McCoy -- actual living DNA.

I have a framed picture on my wall that I look at every morning. Most people know this picture.  It's Orville Wright taking off in his airplane at Kitty Hawk, with his brother Wilbur off to the right, pausing after, I believe, having run with the plane until the moment when it should take off.   There is no artifice about this picture.  It's the real thing.  That's Orville in the plane and that's Wilbur on the ground, and they're sure too busy to have posed for this.

Some people look at the plane.  I look at Wilbur's bent left leg. There's something about that leg.  It's tentative.  It's worried.   Is this going to work?  Is it not?  It's the leg of Wilbur watching Orville take off, but it's also me trying to get my kid to get his grades up to even a "C", or trying to get my daughter to book her own plane ticket for the first time in her life, or get a loan application to go through so we can fight another day.  I am Wilbur Wright.  We are all Wilbur Wright. We are trying to get the plane in the air, despite all the failures that have come before.

This is the most inspirational picture I know of.

This is what's going to get us through the next four years, and it's also what's going to make sure we come out better than before.  All we have to to do is master our craft and work at it, like Orville and Wilbur.  Each day.  We got out of the habit and now we're paying the price.  Now we just have to set things right.

The craft is running a democracy.  The work is paying attention.   The guys running the bicycle shop are you and me. 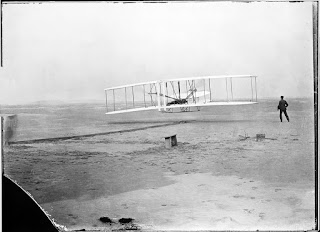