I have spent the spring and summer working on a project that had me in Ontario, Canada and flying back to see my family in California.  That kind of schizophrenia, which often involved stops across the Midwest, left me weary from defending an entire nation which didn't seem to care if I defended it or not.  Usually my defense went something like this: "Forget the politics; this is a country that produced Scott Joplin and jazz and musical theater and Tennessee Williams, rock and roll, and Hollywood.  Beat that."  That's what I said, anyway.  In my truest heart, however, I would think of Paul Rhymer.  The very fact that Paul Rhymer existed makes America great.

No one but a handful of truly crazy people know who Paul Rhymer was, and that handful is dwindling each day.  But I know, without a doubt, that Paul Rhymer was one of the finest and most insightful writers that American ever produced.  He could only be an American because that's the paint his brush was soaking in, the voice and pulse and nuance and tone of an entire nation at a very specific time in its history.  If Mark Twain gave us the indelible portrait of a certain mid-19th century America -- and he did -- and if Fitzgerald gave us the Roaring 20's and Sinclair Lewis gave us the post-World War I Midwest, then Paul Rhymer certainly gave us the regular folks of the first two or three decades of the 20th century.  He gave us "Our Town" before "Our Town" existed, and he did it with an unbridled humor.  He is Twain after Twain, but he was nowhere near as self-conscious as Twain could be, hiding his true light under a cornpone bushel.

But whereas Twain is someone everyone still claims to have read, no one but the aforementioned handful has heard of Paul Rhymer.  That's for two reasons.  The first is that Rhymer had the misfortune of working in radio.  The second is that many of the people who tuned into his genius had no idea what they were listening to. 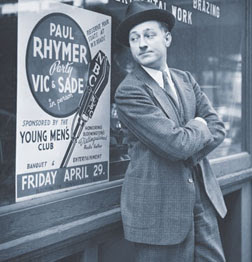 Here's the basic backstory: Born in 1905, Rhymer grew up in Bloomington, Illinois in a middle class family.  Goes to college, drops out, does odd jobs.  Becomes a reporter.  Gets fired eventually when it's discovered that he's been writing interviews with people who don't exist.  He winds up a continuity writer in radio -- which is the lowest form of writing there is. Basically continuity writing is writing "And now, a lovely interlude as we take you to listen to Ramon Raquello and his orchestra playing today at the Purple Room of the Butler House hotel" or plugs for upcoming sporting events. Then, somehow, Rhymer creates a radio series called "Vic and Sade," which runs for 3,500 episodes.  15 minutes a day for 15 years. Every episode is written by Rhymer.  As far as I know, this is all Rhymer ever wrote in his life. Yet this is the basis on which I say he is Twain's equal.

The set-up of "Vic and Sade" was this: Vic and Sade Gook were a married couple who lived in "the little house halfway up the next block" in a drowsy, Midwestern town -- presumably modern day (the 1932-1946, the run of the series), although there were indications that Rhymer was harking back to an earlier time, whether he knew it or not.  They had an adopted son named Rush, a young adolescent.  Occasionally they were visited upon by Sade's Uncle Fletcher.  And that... was it. That is all the show was.  There were never more than four actors who performed on any episode, and while Vic and Sade and Rush and Uncle Fletcher talked a great deal about neighbors and friends and associates -- Rush's friends Rooster Davis or Bluetooth Johnson; Sade's best friend Ruthie Stembottom or Miss Trogel; Vic's lodge member pals or town characters such as Hank Gustop or Gumpox the Garbage Man -- we never heard another voice.  Think of that.  But because Rhymer's writing was so splendid, and because the actors were so terrific, we came to believe not only that they knew these townspeople but that we knew them as well.

Almost nothing happened in any given episode of "Vic and Sade", and each episode took place in the real time it took to hear it.  So perhaps Sade has received a letter from her sister in Carberry and she wants Vic to read it; the back-and-forth on that (and over 3,500 episodes I don't know one time that Vic ever finished a letter written by Bess) would be the entire episode.  They talked.  They had plans, aspirations, concerns, excitements, arguments and frustrations.  One show might be about trying to figure out how to fix a broken alarm clock.  Another might revolve around Rush's frustration that his friend Rooster Davis claims to have more than 341,234 personal speaking acquaintances.  Another might revolve around the local Brick Mush Man (Brick Mush being a food product sold door to door) getting his head caught in the revolving door at the local department store.  As far as I know, no episode took place away from the house -- the furthest they went was the front porch -- and no episode had a time lapse.  This was Mr. Rhymer's haiku, the sonnet rules he set for himself, and he created his panoramic masterpiece within these strictures.


If, in "Winesburg Ohio", Sherwood Anderson explored the dark underbelly of the mythological small Midwestern town, and Thornton Wilder explored its pathos in "Our Town," then Rhymer found and explored both its absurdity and heart in "Vic and Sade."  I like no married couple as I like Vic and Sade.  I admire no father and son as I admire Vic and son Rush.  I know no town, nor love a town, as much as I love the town in which Vic and Sade live (although never named, biographers tell us that Rhymer was really writing about his own Bloomington, Illinois).  This world is real to me, not despite its absurdities and lunacies, but because of them.

Teenager Rush and his pals make a habit of going to the YMCA to watch the fat men play handball. Sade and next door neighbor Ruthie make a ladies day of it at the washrag sale at Yamilton's Department Store. Vic is not just a lodge member of the Sacred Stars of the Milky Way, he is the Exalted Big Dipper of the Drowsy Venus Chapter.  These things are talked about with such casual honesty, such integrity, that we can't help but believe in them, no matter how absurd;  Rush's friend Smelly Clark has his age officially changed, and Vic's lodge friend Y. Y. Y. Y. Flirch is once again hit by a fast moving passenger train. 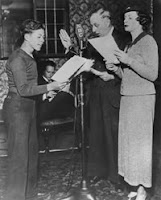 The miracle is not perhaps that "Vic and Sade" got on the air -- it was early in radio, the show was cheap to do and a filler -- but that it stayed on the air.  While we know there were rabid fans who clearly got it and became dedicated worshippers (such as the judge who retired to his chamber for fifteen minutes every day so as not to miss a single episode) I can only conclude that there were that many more fans who followed the show simply became it was plunked in the middle of a field of soap operas and serial dramas and featured the kind of simple home folk that resonated on the Depression era airwaves.  "Vic and Sade" was cozy on one hand, and high satire on the other.  But it was a kind of satire almost never found: it was heartwarming.

Rhymer had a pitch perfect ear for American speech and idiom, and he also, in Sade, wrote one of the first genuine comedic female characters who was also a human being.  His spareness with dialogue and incisiveness was American Harold Pinter before Pinter had been invented, and he predated the Theatre of the Absurd.  But it was his sense of people -- as Lyndon Johnson would say "I mean P-E-E-P-U-L -- I mean PEAPPAL, I'm talking 'folks'!" -- and their foibles, passions, and concerns that made the whole thing sing. 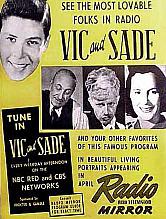 I can't love James Thurber as much as I'm supposed to, and while I admire William Saroyan I've not sure I buy all of it; Will Rogers was a performer not a writer, and the Robert Benchley's of the 1940's wrote satiric commentary, not people.  Rhymer was a great playwright who happened to write for radio, the master novelist who simply chose an unusual medium.  He was the real thing, and those of us who have managed to find him are all the richer for it.


There's more to a nation's cultural richness than "Game of Thrones" and cable news.  There are unique voices who are part of  the tapestry, voices who tell us not just what we were, but who.