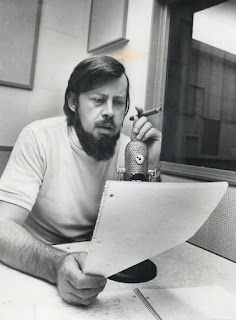 Our father, Rod Coneybeare, has passed away at the age of 89, in Lindsay, Ontario.
Rod was one of the titans of Canadian broadcasting in its golden age, specifically at the CBC.
He is best known for supplying the voice and words of Jerome the Giraffe and Rusty the Rooster on the CBC-TV kid’s show The Friendly Giant, which ran from 1958 to 1985 (yes, those dates are right), but his career in broadcasting actually began much earlier – in 1945, when he was fifteen years-old.  Back then he played bit parts on CBC radio dramas and serials, standing alongside (behind, actually) greats such as John Drainie,  or Bud Knapp.  So he was there, in the halcyon days when CBC was on Jarvis Street and everyone said – even Orson Welles – that the Corp produced the best drama.
Eventually he would become a respected dramatist himself, and his work would be produced by luminaries such as Esse Ljungh and Andrew Allan, for whom he had suitable awe.  But before all that there were seasons in summer stock, in the late 1940’s and early 1950’s (working for Jack Blacklock, onstage opposite the young Barbara Hamilton),  and gigs at small radio stations across Ontario, most notably CJOY Guelph, (where he met his first wife, and the mother of his children, Beth Coneybeare). 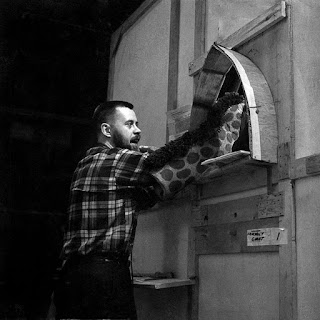 But radio is where his heart lay.  Even though he would gain notice as a serious dramatist during the early days of CBC live TV drama, and even though The Friendly Giant gave him one of the longest friendships of his life, and despite the guest shots and panelist appearances (Front Page Challenge, the other longest running show in early CBC history), radio was where he was most comfortable.  Here he created, wrote, and acted out the fantasies of Out of This World (pre Rod Serling Twilight Zone), amazed a generation of Canadians with the ingenuity of The Rod and Charles Show, or made the country laugh with the eccentric and almost Pythonesque comedy of Coneybeare & Company (my personal favourite).  He would win his two ACTRA awards for radio, one in documentary and one for original dramatic writing, and that’s quite a feat.

And he was so relaxed there.  He literally drank coffee and smoked cigars on the air and rewrote scripts in mid-delivery.   Live.   It was comfort with a medium I have seldom seen.
In person he was a true raconteur in the grand tradition of that word, and larger than life.  He seemed to have opinions on everything, but if pushed to describe his interests and loves, his kids would say these would be the popular music of his youth, classic movies, exercising, pizza, wine, smoking back when that was okay, and art; he loved the Art Gallery of Ontario because you could escape from the world there, and the Planetarium because you could get in a good nap. 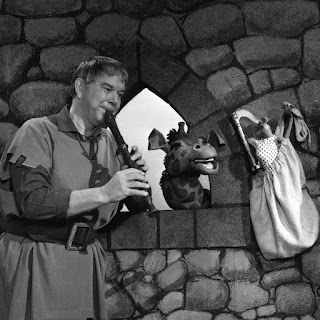 He was idiosyncratic and strange for his time: he had a beard ten years before it became fashionable, and rode a bike daily before grown-ups even considered such an activity (only little kids rode bikes and he, in fact, ordered his from England).  He drove a VW camper bus twenty years before the mini-van (we were mortified) and he played movies at home on a 16mm projector before the VHS was invented.  He taught me to go to the public library every Saturday morning of my life.
And, although he would be loathe to admit it, he was a Canadian patriot.  He had bitter things to say about a country that doesn’t respect its talent enough, but he truly believed that Drainie was one of the finest actors in the world, as was Janet Mallett, Kate Reid, Charmion King, and Gordon Pinsent.  He referred to his generation of artists as a family, and punched back when – how ironic is this? – a Canadian newspaper complained that talking about Canadian artists was boring.

Things about my father that people don’t know:
-          His oldest friend was Elwy Yost.  They met on a streetcar when dad was fifteen.  Elwy and Lila Yost were witnesses at my parents’ marriage ceremony in a registry office in 1952.  He and Elwy made amateur home movies and invented a board game about big business that probably would have made them money had they just managed to focus on – you guessed it – the business side of things for twenty seconds.
-          He had an almost encyclopedic knowledge of the Great American Songbook as well as, of all things, silent movies.
-          He and Bob Homme, “The Friendly Giant”, really were terrific friends and shared many crazed enthusiasms, including collecting classic American radio shows.
-          He was very good with automobile engines and could take 1950’s British sports cars apart and put them back together.
-          He loved SCTV.
-          He could edit audio tape with a razor blade and a grease pencil, often with a cigar in his hand.   He was the best audio cutter I ever heard.
-          He was a very good cartoonist.
-          He could only cook three meals that I know of: eggs, hamburgers, and, bizarrely, chicken parmigiana.
-          He never owned a cell phone or had voicemail.  In no way did this hamper his existence.

He leaves behind his devoted wife of almost forty years, Moira, as well as four children and seven grandchildren,  two cats (one of whom is featured in a graphic novel he was working on up to the end, about a cat fighting, naturally enough, the Nazis during the Second World War), and countless memories.

A larger-than-life man, a believer in language and good talk, of wit, an appreciator of the arts; a boy born in Belleville Ontario who grew up in the Depression, who reached up to turn a radio’s dial and instead stepped into it for the rest of his life.

Rest well and in peace, Rodney.  You made a mark.  You will stay with us forever.