WHAT TRUMP'S COVID REVEALS ABOUT US 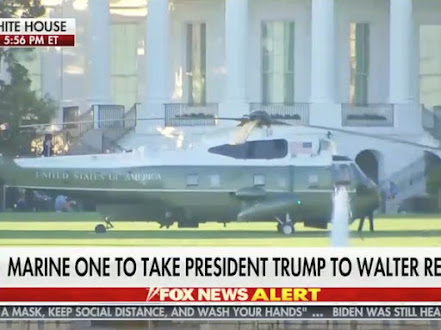 This is a moment of complete bullshit. It’s also one of our most sublime moments.

Let’s just check where we are: Trump has tested positive and who knows what’s going on behind closed doors at that naval hospital. This morning I saw the little minions – those yellow guys from the movies – scurry out in their white doctor coats and do an unbelievably good imitation of talking like White House press spokesman, obfuscating with the best of them. This is kind of amazing, especially for doctors, who aren’t known for their verbal dexterity. If these guys are doctors, right? It’s always good to feed the Twittersphere with possibilities.

The fact is, this medical minion appearance capped an incredible week. In just a few days we have witnessed the appointment of a Supreme Court Justice who shouldn’t be there; found out that Trump is a complete and utter fraud/failure as a billionaire (albeit a very successful tax cheat); witnessed a Presidential debate which debased not just the Presidency but our species in general; saw the President run around the country telling us the covid virus is gone; then found out his top aide Hope Hicks contracted it probably from running around the country claiming that it was gone; then we discover HE has it, and his wife; then we find out all sorts of members of his staff have it, and various GOP Senators; and today, like God on the seventh day, we get a rest.

The bullshit part is that we’re even having to live this. That we’re governed by such awful, miserable, egocentric morons. That we have to tolerate such people, the Hyper Sure and Belligerent, all of whom seem to have an endless supply of incredibly expensive sunglasses.

The sublime part is this: despite everything, despite what so many of us feel for this man and his deplorable family, many of us woke up to discover that we don’t – after all – wish him dead. We wish him out, but most of us don’t wish him dead. And I bet it’s a shock to a lot of us. It sure is to me. And kind of a wonderful revelation.

Let’s be clear: I’m not one of those who likes to express their shock and outrage and daring by talking about killing anyone, or how it would be good if a brick fell from a high building, or any of that. I have friends who send me this kind of stuff about Trump in the form of “funny” memes, and I admit I don’t find it funny. Instead, I am unsettled by it. I wish I could say it’s because of some deep seated Christian or humanist instinct, but I don’t think it is: it’s just a basic sense of ‘No.’ (Like the time my friend Dave beat up a guy in the Frank Vetere's Pizza Parking lot for looking at his girlfriend, then stealing his wallet; no, Dave. We all knew the beating was perfectly reasonable - after all, the guy had looked at your girlfriend - but the taking of the wallet was just plain wrong).

I’d also be a liar if I didn’t admit that, in the safety of my house and in my heart, I have thought and said some pretty awful things about the President, who I do believe is a murderer (second degree anyway) and perhaps even guilty of genocide. He’s certainly one of the most odious people our society has run across in the last seventy-five years, and maybe longer: after all, Joe Stalin knew how to throw a dinner party and Hitler enjoyed art and had a dog.

But then, Trump himself got this virus and I’m surprised to discover that I do not wish him to die. Nor his abominable wife, she of Shakespearean depths of smoldering hatred and designer evil.

And I am not alone! Tons of people in the public sphere have stepped forward to express the same thing, and even if you chalk a good half of it up to public form, then at least the other half of us are acting out of basic decency. Sure, GOP Senators have every reason to wish the President well, but Joe Biden? Biden himself may have been infected by the guy (knowingly!), yet he’s publicly expressed goodwill and bonhomie and even pulled his negative ads on Trump for the duration of Trump’s illness – leaving us, I guess, just those turgid tearjerker spots about the seemingly endless number of dead members of Joe’s family, apparently doomed to an eternity of being exploited for political gain. And Al Franken? What benefit is there to Al Franken to be decent about Trump?

No, I think we’re discovering that underneath all the slime and sludge, there are more decent people than deplorable people out there, as long as you stay off Twitter.

The irony, of course, is this:

Trump is not one of them.

Let’s be honest. There is not a sentient being on this planet who believes that if the shoe were on the other foot – “BIDEN ANNOUNCES HE’S TESTED POSITIVE FOR COVID-19” – that it wouldn’t be a shower of indecency. “Looks like the basement and the phony mask-wearing didn’t save Sleepy Joe, who we can count among the dead before the election. WEAK!” Or, “Looks like Dem Disease is going to put an end to Biden’s socialist plans to destroy America. SAVED!”

This is all too easy to imagine.

So, to make the irony greater, the recipient of all this goodwill doesn’t deserve any goodwill at all.

And he’s got company. We are now zeroing in on where and how all this started, and it appears to have been the hilariously unsafe maskless ceremony in the rose garden ‘announcing’ Amy Coney Barrett’s nomination to the court. As a result, all the Gods were there, a full pantheon: Kellyanne, Hope, Melania, Chris Christie, Bill Stepien, Senators Tillis and Lee, etc. etc.

Then Fate hurled its forked lightning bolt, and for all their hubris and arrogance every single person I listed has been struck with COVID, Trump (Zeus) prime among them, of course. William Barr was also at the event, but so far he’s not announced infection. As readers of mine know, I maintain that Barr can’t be infected as he’s not actually a human being, but is, instead, a full on Rankin-Bass character.

One final thing, seemingly unrelated, but trust me, it ties in:

In general, Presidents are pretty disposable. We not only have a spare one ready, we have many spare ones, most of whom will do just as good a job in a pinch. Seldom is a President as a person indispensable. There are some exceptions: I think we’d all agree that if it were 1943 and FDR came down with COVID, we’d all have good reason to light our hair on fire; JFK in October 1962 might be another moment; certainly Lincoln throughout his entire first term; Harry Truman a couple of times during the Cold War; George Bush right after 9-11. Like it or not, these were moments when it mattered who the guy was. But Trump? Trump??

Trump as a President is best when he does nothing. Only when he’s conscious are we in our greatest danger. So this hysteria over “the nation in crisis” because Trump has coronavirus, or even might be dying of coronavirus, is a childish national reflex action, all of us remembering back to a time when it mattered.

The truth is that the President himself doesn’t matter, if in fact the Presidency matters anymore at all. Certainly the last few years shows that a bad President can do very little good and tremendous bad, and yet that’s who we’re boo-hooing about now, he and his miserable familiars.

o I don’t want anyone to die, I just want them to go away. There’s a difference. And thank God that most of us know, and can feel, instinctively, the difference. Because he can't.