COMFORTING MOVIES FOR BEFORE, AFTER, AND DURING THE ELECTION 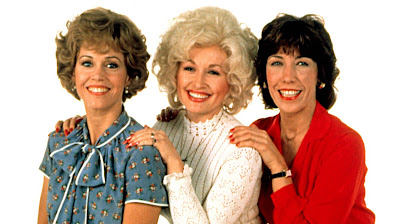 My Emily - my daughter Emily - asked me to do a list of comforting movies that people could watch leading up to the election.  She suggested I post it on this blog, even though usually what I do here is write mini-essays, or whatever you call them. There is some logic in her request, as I've spent a good chunk of my life immersed in movies, and have even directed a few, and written more. So presumably I know a thing or two. Or she thinks I do.

But she says she's having problems finding such lists online - which I find hard to believe - so perhaps there really is a need.  I've decided to list 10 movies today in no particular order and with  no logic, although I'll try to dip into a variety of genres and era. Spread it out a bit. I'm hoping to do another list in the next few days.

The problem of course is the definition of "comforting." "Comforting" suggests something other than "feel good," which I have always taken to mean the end result of the movie, whereas "comforting" is all about the ride. Rocky, for instance, has to be the zenith of feelgood movies, but is it "comforting"? Rocky's life is pretty crap throughout, and for much of the movie things are no more fun than in On the Waterfront (which it resembles in many many many ways), but it's hard to beat that last twenty minutes.  But... feel good.  Not comforting. Emily said comforting.

A second problem appears when making a list of comforting (or for that matter, feel good) movies, and that problem is what I call the Kevin Costner Effect.  Simply put, Kevin Costner has been in an incredible number of comforting and feel good movies. It's staggering, actually. He deserves a category all his own. I toyed with giving Costner just that, but then decided I'd be robbing myself of the chance to pad out a list when I'm in trouble, so if you see an inordinate number of Kevin Costner movies, too bad. It just is. Like Everest, or one of those things.

I also toyed with avoiding politics due to where we are in the calendar, but decided that was too limiting too.  There are unbelievably comforting movies that deal with politics and if you can't handle that, again, too bad. So that's a good segue to my first movie choice, and remember these are in no order:

MR. SMITH GOES TO WASHINGTON (1939). Frank Capra directing, Jimmy Stewart acting and overacting, Claude Rains peerless, Edward Arnold nailing it, Thomas Mitchell -- and Jean Arthur!  She is so good it's to die, especially in her drunk scene. This is simply one of the finest movies ever made, and it will make you love America even as it admits the flaws and faults and problems. Jimmy is us and we are Jimmy, and here's another reality: you just like being there. It's 1939, and Jimmy's "Ma" back home is helping the little kids put out his magazine - "Boy's Stuff" or something -- and it's just so so so wonderful, you want to breathe it in or swallow it. How about the Lincoln Memorial scene? You think you know this movie. You don't. Watch it again. Check all cynicism. And watch Jean Arthur in the bar scene.

FIELD OF DREAMS (1989). What?? Kevin's here already?? Yes, Kevin and Amy Madigan and Ray Liotta and James Earl Jones and BURT LANCASTER as Doc Graham. It's about America, and baseball, and dads, and writing, and imagination, and reconciliation, and you're happy to be there the whole time. Again, check your cynicism. You don't have to know or care about baseball.  This is magical.

THE KID (2000).  No, not the Chaplin movie. That movie is terrific and an amazing work, but it isn't comforting. In some places it's comforting.  This is Bruce Willis the winner - big luxury house, scads of money, got it all - and he's magically visited by himself as a child: total loser Spencer Breslin, complete with lisp and every annoying tic in the world. There is a great supporting cast here, but the movie belongs to these two as Breslin proves to Bruce that his life is shallow and he took the wrong road less traveled. Here's a fact: I love Bruce Willis.  If he could act, it might even be better, but I really love Bruce Willis. In this one, he remembers why he became famous - light, irreverent smartass leading man - and the kid puts him in his place.  And there's a dog in it! Which leads me to ...

MY DOG SKIP (2000). Just watch this. Just do it. Just trust me. It's based on a memoir of one of America's finest writers, Willie Morris. Somehow Jay Russell and Gail Gilchriest made one of the most charming, sweet, appealing movies ever out of Morris' slim work, and it relieves you of all critical faculty. Here's the plot: it's the 1940's and 9 year old Willie is given a dog. That's it. Watch.

9 to 5 (1980). Jane! Dolly! Lily! Colin Higgins (totally underrated top-flight commercial filmmaker) co-wrote and directed this thing, and Dabney Coleman is terrifically oily as only Dabney can be, but this belongs to Jane, Dolly, and Lily. It's charming, funny, insane, and if you're thinking it's a period piece about first or second stage feminism, think again (I'm sorry to say).  I defy anyone not to smile and hoot and cheer through this movie and, of course, there's one of the greatest theme songs ever. I want to watch this movie right NOW.

THE MORE THE MERRIER (1943). There are a lot of candidates for the greatest screwball comedy, and technically screwball comedies are pretty much the province of 1930's America, but this one goes to the top of my list even though it's made in - and the story relies on - wartime America. Specifically the housing shortage in Washington DC, which puts Joel McCrea, Jean Arthur (again!) and Charles Coburn in the same apartment. Madcap comedy ensues. Jean changes her outfits every three seconds it seems (despite her fixed income), and the guys are largely over the top and some of their behaviors are borderline moronic, but I love this movie top to bottom. An incredibly witty script and it contains of the sexiest scenes ever put on film, which involves nothing more than Jean Arthur and Joel McCrea sitting on her front stoop and talking. Watch her performance. God, was Jean good.

BACK TO THE FUTURE (1985). Oh, what's this? It's a rainy Sunday afternoon, nothing to do, perhaps I'll watch Schindler's List. Or 400 Blows. Or Padre Padrone. Well, you might, but here's Back to the Future. Marty McFly, the DeLorean, Doc Brown, 88 miles an hour, Marty's in 1955 hanging out with his parents! You like this movie or you're just an awful person. Everyone is great, even the folks who really aren't that great but we think are great.

MCFARLAND USA (2015). What's this? A Kevin Costner movie! I bet everyone forgot about this one. Here's the plot: football coach Costner loses his job and winds up in McFarland, California, a predominantly Latino and lower income area, and Kevin's family doesn't like it one bit. But Kevin winds up coaching the boy's cross country track team and from there everything goes very very very comfort. Watch how Kevin and his family begin to understand their new neighbors, watch how Kevin teaches the kids, watch how the community reaches out to Kevin, notice how happy you are through this movie. Just enjoy the key ingredients: Kevin, a sport, the big day, we don't stand a chance. It does exactly what it's supposed to do.

(See? I would now put in Hidden Figures, but I get to save that for another day).

GREASE (1978). This is truly a bad movie. That said, I last saw it two years ago at a drive-in (it was my birthday), and I loved every second of it. It's insane. I won't even get into the plot, because everyone knows it: Sandy and Danny and they fell in love one summer, then it turns out Sandy is going to Danny's high school and Danny - huh? - can't reveal what a nice guy he is or he'll lose the respect of his friends.  Car, drag racing, songs, beauty school stuff, I have no idea. The moral of the movie turns out to be, "If you want to keep your boyfriend, dress like a slut."  Then you ride off in a magical car into the sky. WTF? But... but... remember what Emily asked me to do.  Are you going to cry through this movie? Are you going to need a drink because it's so true to life? I do not think so. See, she dresses like a tramp in the end and there's this magical car... I have no idea. It just is. (BTW, I might even add Hairspray to this list, also with John Travolta. I seem to be the only person that liked this movie and thought Travolta had outdone himself, but that's for another day).

SINGIN' IN THE RAIN (1952). "Dignity, always dignity." This script is so witty, so brilliant, so fast, that it says something about the musical numbers that they almost manage to consume the genius of the whole affair. And the cast. And the design. And the sheer Technicolor splendor of it. The rain sequence is terrific but it's not the whole thing, not by a long shot. Jean Hagen. What the hell? Is she spot on? How can anyone be so good? The only possible misfire is the bizarre Broadway Rhythm ballet in the middle, but parts of it are so beautiful, what are you gonna do?

Is that ten? I went back and looked. I think that's ten!  Okay, let me know what you think. I have to go, but I hope I've done my job for those of you who are literally having a nervous breakdown over the damned world, the damned election, and the damned everything.

Emily, I hope this helps. I'll do more later.