IS IT JUST ME? QUEEN'S GAMBIT IS ALSO ROCKY III AND IV 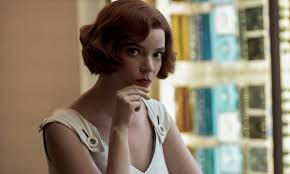 Don't get me wrong. I'm now 6 episodes into "The Queen's Gambit" - so almost done - and I'm enjoying it. I have some quibbles, but those are quibbles, but I'm in a mood these days to enjoy something for the sake of enjoying something, and I'm done with pointless smart criticisms. So it's good. It's good. Buuuuut.....

I can't be the only one to notice that the plot of "The Queen's Gambit" is pretty much "Rocky III" meets "Rocky IV."

Because, boy, is it ever.

[HERE THERE BE SPOILERS of.... well, all three titles.]

So an impossibly unlikely contender rises up out of nowhere with a totally improbable shot at the title. A disappointed-in-life manager appears to nurse the contender to champion status, and it works!  They go on a run of title after title, easy knock-outs, until the champion finally faces a REAL challenge. On that very night, during the match, the manager dies as the champion takes a first big - and psychologically devastating - loss. We are all stunned. Champion returns home to lick their wounds, only to be visited by an old rival who says they are going to coach the wounded champ. The message is clear: "No, you can still be a champion, but you just have to RE-LEARN everything you know, and learn how to counterpunch. Why? BECAUSE YOU'RE GOING TO FACE THIS UNBEATABLE RUSSIAN WHO IS SO GOOD THEY'RE NOT EVEN HUMAN!!!" So, it's back to roots, back to self, back to the basics, to learn how to beat the indomitable Russki.

Need we say that the Russian is clearly a construct of the evil Soviet empire? A mechanized product of the Soviet obsession with winning (in "Gambit," some of the lines about the terror of facing this Soviet seem almost line for line "Rocky IV" fodder).

Don't get me wrong. I love this plot, and as episode 4 of "Queen's Gambit" started I certainly felt that we were in sorrowful need of some pretty strong narrative;  things seemed to be slipping, we didn't have the lean-forward we had in the first two episodes, so what's wrong with going to the Italian Stallion for a little plot advice?

But is it conscious or is it just an accident? My guess is - having worked on a lot of TV series myself, although nothing like this - that it's just a fluke, or inadvertent Xeroxing. To be clear: Quentin Tarantino steals (he doesn't even consider it stealing, I think), but I doubt Scott Frank, a seriously talented guy, and the "Gambit" team were watching old "Rocky" movies to get their inspiration, and they have the added fact that "The Queen's Gambit" is based on a novel by Walter Trevis, who also wrote "The Hustler," "The Color of Money," and, unusually, "The Man Who Fell to Earth," which was adapted into an underrated movie by a totally underrated director, Nicolas Roeg.

In contrast to the clean, cool style of "Gambit," the "Rocky" movies had crazily embarrassing plots that were nonetheless utterly engrossing, which pretty much means that they weren't so crazy after all. Sylvester Stallone clearly knows what he's doing as a writer, and I applaud him also for his singular skill with crazy-ass character names: Apollo Creed, Clubber Lang, and, most terrifically, Ivan Drago. One wonders what would have happened had Stallone been born 80 years earlier and had to express himself through writing adventure pulps. He would have KO'd even Arthur Conan Doyle (who gave us both Sherlock Holmes and that intrepid dinosaur hunter, Professor Challenger) and Edgar Rice Burroughs (who gave us Carson Napier and Tarzan).

Anyway, I digress. "The Queen's Gambit." I decided to do a little research and discovered that Trevis' novel was published in 1983, whereas "Rocky IV" is a 1985 release. Knowing what I do about movies, that means the script was, at the latest, being written in 1983. Alas, "Rocky III," which also has a lot of "Gambit" elements, is a 1982 release, so any reasonable person has to give the match to Stallone, or at least a draw on any "Rocky IV" similarities.

Who cares? It's all great, and as I say, I'm putting all my money on it being accidental.

But it raises this question: is there any chance we can just throw caution to the winds and meld the two? "The Queen's Gambit" might benefit from a little CLUMP! CLUMP CLUMP CLUMP! - which is me writing the opening crash chords of "Eye of the Tiger." By the way, there literally are training sequences in "The Queen's Gambit" that are somewhere between Mike Figgis split screen, "Ocean's Eleven," and Rocky's legendary "gonna fly now" sequence, and I'd be okay with Carl Weathers somehow showing up in "Gambit" and giving Beth Harmon a little buck-up lecture, before the Russian chess champion literally kills him, which inspires Beth to take that Russian bastard apart by castling him mercilessly. Now that is entertainment!

Anyway, this is not my traditional blog entry but really just a love letter to both entities.  There are archetypes and tropes in all narrative, and it's often fun to find them, in a kind of "Where's Waldo" way, and it doesn't detract from the entertainment, enjoyment, or the art. I well remember one of my kids' eyes popping as he realized what I meant when I said, "Tell me what Dumbledore and Harry have to do with Luke and Obi-Wan and Arthur and Merlin and the Karate Kid and..."  Well, for that matter, Mickey and Rocky!! 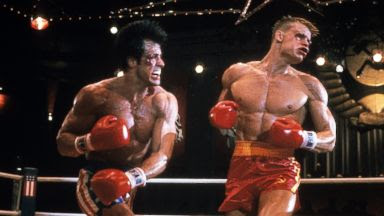