"A FEAST OF WOLVES" EXCERPT: the romantic part 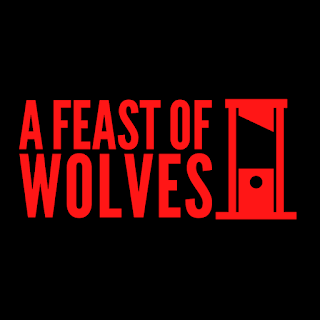 For the next few months, my plan is to drop excerpts from my new novel, "A Feast of Wolves" - in between the usual things I might post on other subjects. The idea is simple: give you a taste of what the book is all about, and maybe get folks to press that all important "ADD TO CART" button on Amazon.

Without tooting my own horn, I realized only after the book was published that there were a lot of different tones in the story. There's a kind of hole you get into when you say "it's a book about a new Civil War in America, complete with a guillotine on the steps of the U.S. Capitol." You might assume there's old fashioned thriller sections, or mysterious doings, but romance? This is one of my favorite sections below. It kind of stands on its own in a way. Our hero, Chase, a young Princeton professor, is remembering a few years back, when he first met a young woman in London who changed his life.

A FEAST OF WOLVES

She unmanned him. That’s how he always thought of it. Like an old 19th-century English novel where the staid and upright earl confronts the willful peasant wench. “Unmanned him.”

Chase had already been in London two weeks. He’d come for a series of interviews about where he was going to do his doctoral work and was only starting to get the lay of the land (Edinburgh romantic but impractical, Cambridge an obvious step but unappealing). So far, he had enjoyed teas in quiet clubs and mainstays like Claridge’s or the Langham, as well as private meeting rooms paneled with the decking of transatlantic steamers. That Saturday afternoon he was going to meet a Dr. Budden, PhD, King’s College, who had suggested they have lunch and go over Chase’s options. He would never keep the appointment.

He didn’t know it, but his life destiny was wrenched off course the second he emerged from the entry turnstile onto the westbound platform at West Ham’s outdoor station. He saw a young woman, around his own age, with luxuriant purple hair, kicking the living shit out of a subway car at the far end.

“Sonofabitch!” she shouted. Clearly, an American.

She was tugging at something unseen, on which the doors of the train had closed prematurely. A suitcase, Chase realized.

The closed doors may have created a barrier between the girl and the bag, but they did not disengage one from the other. The girl held onto the long handle of the case with both hands while kicking at the doors with her black combat boots. These were a marked and appealing contrast to her short, soft, summer dress and man’s jean jacket.

The hair, though. That’s what Chase saw. There was so much of it. Long and ringleted. Like a heroine in an opera. Except it was purple. For no reason he could later explain, he started to walk toward her. As he did, his eyes took in the whole scene: the girl, the bag handle, the train, the almost-deserted station platform, the red push button on the wall, and the frustrated driver in the left-hand side of the first car, only now starting to realize there was something wrong in one of the cars behind him. The driver checked his in-car monitors, trying to see what that problem was.

Chase offered up a “halt!” hand to the driver, then strode past him toward the end of the platform and the girl.

Inside the subway car, passengers were also starting to react. Two teenaged boys tried to pry open the doors for the girl while clearly enjoying the opportunity of being able to destroy transit property.

“Fuck sakes!” she said, wrenching the bag to one side. “Push the red button,” Chase said.

She didn’t hear him or see him. She kept struggling.

For reasons utterly unfathomable, the driver up front decided that whatever had gone wrong at the rear of the train was probably cleared by now, despite no supporting evidence. Suddenly the loudspeaker intoned its robotic “Stand clear of the doors, please, the doors are now closing,” although clearly the doors had already closed.

The train began to slowly inch out of the station.

“Hey!” The girl’s tone shifted from belligerence to panic, and the boys on the other side of the closed door began to laugh. No skin off their noses. The purple-haired girl began to run along with the train, still refusing to let go of the thin bag handle. She was heading right into one of the iron beams which supported the rain cover.

Chase moved quickly. His hand didn’t hit so much as smash the red STOP button on the station wall.

The train jolted to a screeching stop.

The girl was yanked to the ground by the sudden stop, landing less than two feet from the iron beam which almost surely would have killed her. She did not, however, let go of the bag. Later, Chase would think that was it. Her character. Right there.

Soon enough, things pretty much righted themselves. The bag was back in the girl’s full possession, the teenagers were back in their seats, and the annoyed driver was able to go on his way with his passengers, although the man seemed more interested in bitching about the paperwork he would have to fill out.

“Every time some damned fool pushes that red button!” he shouted in Chase’s face. “Which is only for legitimate incidents!”

“This was a legitimate incident,” Chase said.

The driver clearly thought otherwise. He continued to shout and point. So did the girl.

Chase didn’t care. He was busy studying the right side of the girl’s head, which turned out to be in complete contrast to the left side. Here, things were shaved down to purple stubble, a ying-and-yang contrast with the luxuriant ringlets on the left. Somehow, he thought, it made her even more beautiful, if such a thing were possible.

Of course, this was not Chase as he had been for the first twenty- four years of life. Chase was a realist, not a romantic. Rationally, he also knew that most men believed the woman they were bedding was the most beautiful woman on earth – something women were utterly unaware of. But in this case, he believed he was right. She was the most beautiful. And, of course, not just because of her physical appearance, but her humor and her wit and her dark, canny spirit.